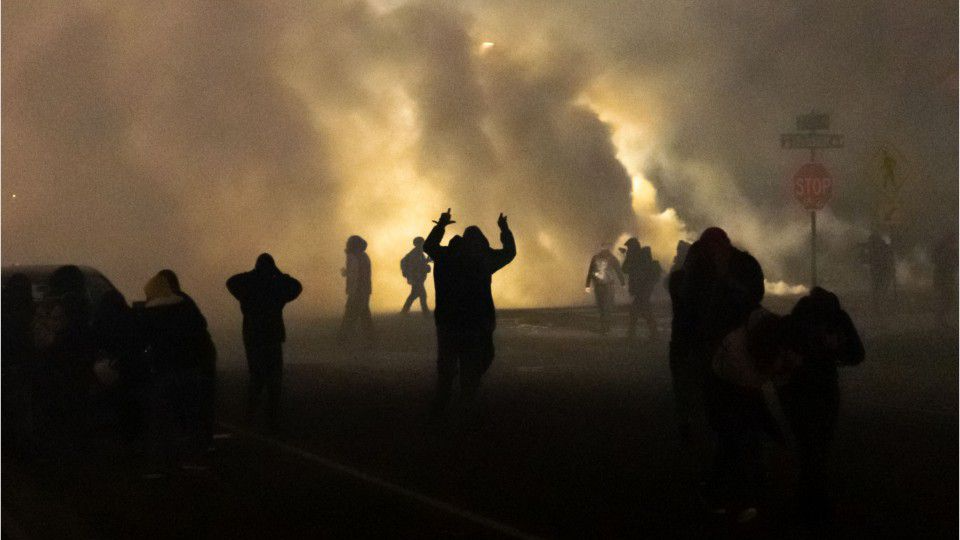 The shooting claimed the life of Daunte Wright, who had been stopped for driving with expired tags, Gannon said.

Brooklyn Center is located on the northwest border of Minneapolis.

Update 3:55 p.m. ET April 12: A third Minnesota sports team has announced the postponement of a game slated to go on Monday in the wake of Sunday’s deadly shooting of Daunte Wright, 20.

Officials with the Minnesota Wild and the National Hockey League said a planned game between the team and the St. Louis Blues has been postponed.

“The decision was made out of respect for the community, following the tragic shooting that occurred in Brooklyn Center, Minn., Sunday afternoon,” officials said Monday in a news release. “The National Hockey League extends its sincere condolences to the family and friends of Daunte Wright.”

Officials said the game will be played May 12 in St. Paul.

Earlier Monday, the Minnesota Twins announced the postponement of their scheduled game against the Boston Red Sox. ESPN reported the Minnesota Timberwolves also planned to postpone their game.

Officials with the Minnesota Twins announced Monday that the team’s game against the Boston Red Sox would be postponed after deciding that “it is in the best interests of our fans, staff, players and community to not play today’s game.”

“The Minnesota Twins organization extends its sympathies to the family of Daunte Wright,” team officials said in a statement.

Citing unidentified sources, ESPN reported that the Minnesota Timberwolves also plan to postpone their game against the Brooklyn Nets, which was scheduled to go on Monday. It was not immediately clear when the game would be played.

Gannon said only that the officer is a “very senior” member of the department.

“My position is that we cannot afford to make mistakes that lead to the loss of life of other people in our profession,” Elliott said. “So I do fully support releasing the officer from her duties.”

Gannon said he would await the results of an investigation led by Minnesota’s Bureau of Criminal Apprehension.

“She will not be returning to duty until this investigation has run its course and she, for all intents and purposes, I think we can look at the video and ascertain whether or not she’ll be returning,” he said.

In the video, an officer could be seen handcuffing Wright outside of the white Buick he was driving. He could be seen apparently trying to get back into his car a short while later, initiating a brief struggle.

An officer could then be heard shouting “Taser” several times while pointing a handgun at Wright. Gannon said Monday that it appeared the officer accidentally drew her handgun instead of her Taser. He called the shooting an “accidental discharge that resulted in the tragic death of Mr. Wright.”

Brooklyn Center Police Chief Tim Gannon blames the police shooting of Daunte Wright on ‘an accidental discharge,’ saying the officer intended to deploy a Taser, but instead shot Wright. The officer is on administrative leave. Gannon later chastised community members for looting pic.twitter.com/ZkJHRPkyt6

Hundreds of people marched to the Brooklyn Center police department. Earlier in the evening, KARE recorded video of about a hundred people gathering at the crash site and trying to damage police vehicles, CNN reported.

Minnesota Department of Public Safety commissioner John Harrington told CNN that some people threw rocks and other items at the police department building.

A second group of protesters went to a nearby mall where 20 businesses were broken into, Harrington said, according to CNN.

The city’s mayor had ordered a curfew through 6 a.m. Monday after he declared a local emergency because of “growing civil unrest.” Schools were closed for in-person learning and transitioned to online “out of an abundance of caution following the officer-involved shooting,” Brooklyn Center Community Schools Superintendent Dr. Carly Baker said on the district’s website.

Original report: According to police, who have not identified the shooting victim, the vehicle traveled “several blocks” after the driver was shot before crashing. Life-saving measures performed at the scene were unsuccessful, and the man died, the news release stated.

Family members identified the man killed as 20-year-old Daunte Wright, who is Black.

Wright’s mother, Katie Wright, told KARE that her son called her as he was being pulled over to request insurance information for the vehicle, which she had recently given him. She said when she called back “a minute later” that his girlfriend, the passenger, answered and told her that Daunte Wright had been shot.

By Sunday night, several hundred people had gathered near the scene of the shooting, with protesters pushing past police tape to confront riot gear-clad officers, the Star Tribune reported.

At around 7:15 p.m., police fired non-lethal rounds to disperse the crowd after protesters broke the windshields of two patrol cars. By 8:30 p.m., the police presence had waned, and the remaining crowd “calmly gathered to light candles, burn sage and write messages like ‘Justice for Daunte Wright’ in chalk on the street near the scene,” the newspaper reported.

The female passenger was transported to an area hospital with non-life-threatening injuries related to the car crash, the news release stated.

The Minnesota Bureau of Criminal Apprehension is investigating the shooting, and police officials told KARE that it is believed both dash cameras and officer-issued body cameras were activated during the shooting.

Sunday’s shooting comes during the ongoing trial of Derek Chauvin, the former Minneapolis police officer charged with second-degree unintentional murder, third-degree murder and second-degree manslaughter in the May 2020 killing of George Floyd.