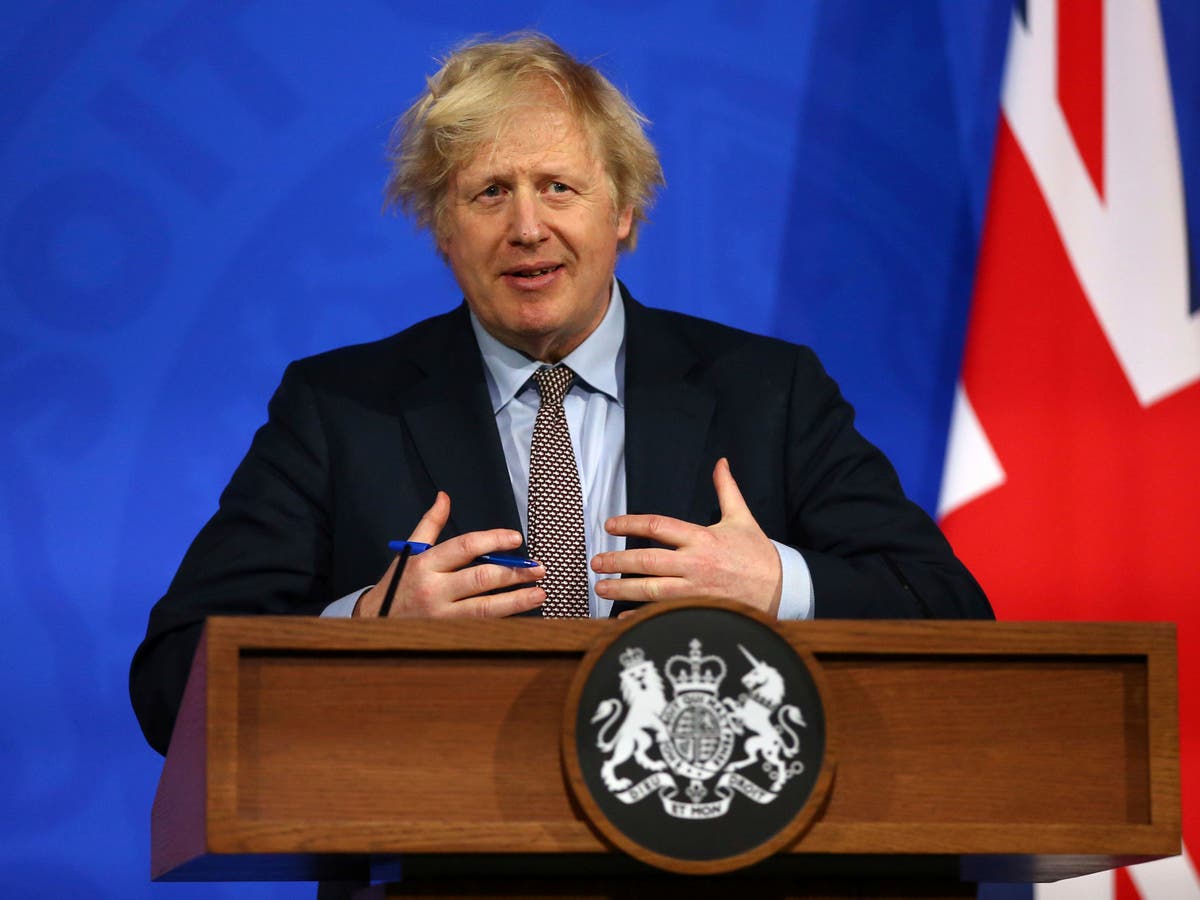 Boris Johnson will set out plans for a “Covid status certification” scheme and a ‘traffic light system’ for foreign holidays as part of the roadmap out of lockdown.

While many MPs have voiced concerns over the idea of “vaccine passports”, it is hoped that the scheme will enable the safe return of mass events, such as sports matches, conferences and night clubs, without the need for social distancing.

And with airline chiefs urging the prime minister to allow international holidays within weeks, he is also expected to set out how foreign holidays will be work from 17 May.

Mr Johnson is expected to announce more details for both schemes on Monday.

The government is due to begin trials for large gatherings this month with several pilot events hosting around 3,000 people at a time with Covid tests both before and afterwards. However there was a public backlash after it was suggested the events would also involve ‘vaccine passports’, prompting Liverpool City Council to confirm that no such certificates would be needed for the trial events in the city.

Police have dispersed an illegal rave in the Herefordshire countryside after local villagers complained about loud noise at 1am this morning.

Officers issued a Section 63 dispersal order under Criminal Justice Public Order Act after some of the group remained in the area near Dorstone in the Golden Valley.

Some people were arrested for driving offences.

Herefordshire Superintendent Ed Williams said: “I am pleased to say that we were able to clear the area in a calm and peaceful way.

“I’d like to assure the community that we take this very seriously and dispersing the gathering was a top priority for officers today. Police will continue to patrol the area to ensure the issue not re-emerge.”

Colombia’s president Ivan Duque has announced that further restrictions will be imposed based on pressures on intensive care units,

Cities with an ICU occupancy of above 85 per cent will have a curfew from 6 pm to 5am, while those with between 80 per cent and 85 per cent capacity will have curfews beginning at 8 pm.

The country has recorded more than 2.4 million coronavirus cases and nearly 64,000 deaths. Nearly 2.4 million doses of Covid-19 vaccines have been administered.

“It’s clear that … some municipalities have shown increases in recent weeks and there also exists the risk of a new national increase in the coming weeks,” the president said in remarks broadcast on social media. “We must act, prevent and take appropriate decisions.”

Boris Johnson to set out plans for ‘vaccine passports’

Here’s a reminder of the government’s plans for “Covid status certificates”, which have already sparked a backlash from Tory MPs and the public.

Several trial events for mass gatherings without social distancing have been confirmed but they will only require a test before and afterwards rather than proof of vaccination.

Boris Johnson is set to outline a traffic light system central to the government’s plan to open up foreign travel while preventing Covid variants finding their way into the UK.

Ministers have said the current lockdown ban on international travel will remain until at least 17 May, with the government’s global travel task force due to report on recommendations for next steps on 12 April.

But on Monday the PM is expected to set out a system under which countries are assessed across a range of factors and assigned one of three risk ratings.

Vaccines go on sale in Pakistan

People lined up to pay around £57 for two doses of a coronavirus vaccine in Pakistan this weekend, after the country permitted commercial sales for the first time.

“I am very happy to get it, since now it is required for travelling,” Saad Ahmed, 34, told Reuters today after he got his Russian Sputnik V shot at an upscale private sector hospital in Karachi.

The government is offering free jabs to healthcare workers and those aged over 50 but so far only around 800,000 doses have been administered – or just 0.2 per cent of the population.

No crowds for Pope’s Easter message

Before Covid, tens thousands of people would gather in the Vatican City to hear the Pope’s Easter blessing.

This time – like last year – just 200 or so faithful were allowed to attend the service at St Peter’s Basilica and crowds were banned from gathering in the square outside.

During his address, Pope Francis used his traditional Easter Sunday address to denounce the “scandalous” wars which continue to rage during the coronavirus pandemic.

The owner of a Liverpool comedy club taking part in the pilot events has said he received abusive messages after the government wrongly suggested it would require people to show “vaccine passports”.

Paul Blair, who runs the Hot Water Comedy Club, told the Guardian that people on social media accused him of “medical apartheid” and told him to “catch Covid and die”.

“We are NOT and will NEVER be part of vaccine passport program,” the club tweeted.

The event is taking place M&S Bank arena on 16th April with no social distancing. Covid testing will take place both before and after the show.

Three thousand people will also be able to attend the UK’s “first post-Covid nightclub” event in Liverpool later this month.

The party will start at Circus in a warehouse at Bramley-Moore Dock on 30 April, with another 3,000 to attend the following day.

People who want to attend must live within a Liverpool postcode and will have to test negative for Covid-19 before entering., according to owner Yousef Zaher. They will also have to take a second test some time after the event.

Mr Zaher added: “Maybe it’ll go down historically in some way, but for me the important thing is to get out of Dodge the best we can, try and get Covid behind us.”

Two independent observers were arrested under Covid regulations at Kill the Bill demonstrations on Saturday, according to human rights group Liberty.

The charity condemned the move as an “intimidatory tactic to deter protest” and said it is now taking legal action against the Metropolitan Police.

More than 100 people were arrested at the protest in London for a range of offences including breach of the peace, violent disorder, assault on police and breaches of Covid legislation.

One of the government’s pilot events for the return of spectator sport is a 10km race weekend in Hatfield, Hertfordshire.

The organisers of the Reunion 10k say they are working with scientists to test different protocols at three separate runs on 24 and 25 April.

Each race will involve 3,000 runners and 3,000 spectators and everyone attending – participants, spectators and staff – will be required to take a Covid-19 test both before and afterwards.

Everyone will be asked if they have been vaccinated but this is not a requirement to attend, according to organisers LME.

Hugh Brasher, event director of LME, said: “We are doing three different ones to progressively learn from each one.

“So the protocols with each one, there will almost certainly be a slight difference on each one of them, and that is the detail that we’re currently working out with scientists and DCMS (Department for Digital, Culture, Media & Sport).”

Mr Brasher said the event is an “important milestone”, adding: “We absolutely believe that this is a key step to a lot of big events happening over the whole of the summer period.”

The other pilot events include the FA Cup and Caraboa Cup finals at Wembley and a nightclub in Liverpool.